Setting forth from the enchanted city of Silverymoon, center of Magic and Learning in the Silver Marches and home to the powerful and mysterious Lady Alustriel, the Shadowbane Brotherhood takes the High Road east to Anauroch. In their previous meeting with the Lady, she gave them one of the missing fragments they were sent to find, and told them where the next could be located, in the clutches of a wicked Lamia Sorceress named Koreeis, who made her lair in the ruined city of Hlaungadath. This place is known to be overrun by a number of her kind, as well as the evil, dim-witted desert-dwelling Asabi.

The journey begins easily enough, as the weather is fair and the Silver Marches make for beautiful travel. Soon our heroes find themselves passing Sundabar; though no business takes them there at this time, they marvel at it’s stalwart bastions and take note to visit at some point in the future, should they find the time. Continuing onward, they soon find the vales and grasslands of the Marches giving way to a more arid, scrubland terrain. A day or so after gives way to full desert. Passing the ruined city of Ascore, our adventurers are riding down the road about a week outside of Silverymoon when out of nowhere, a huge Dunewinder erupts from the ground directly in front of the party and assaults them! Covered from end to end in vicious, spiny protrusions which glisten with some sort of venom, the pinnacle desert predator unleashes a hellacious line of fire upon our unfortunate heroes in the form of its breath weapon. Pippy and Talbot are both flung to the ground as their horses are nearly incinerated beneath them, and the fight is on! 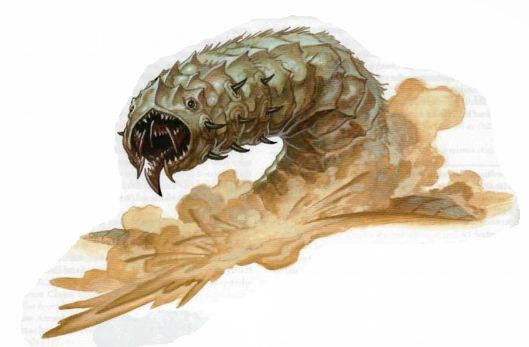 Utilizing it’s burrow-speed to frightening effect, the Dunewinder identifies Pippy early on as its primary threat, taking a vicious lightning bolt to the face from the halfling wizard, sprawled though he is on the ground. It drops below ground and reappears seemingly at will, smashing into the wizard for massive damage, grappling him easily, and attempting to poison him in the process. Miraculously, Pippy is not affected. Finally managing to catch up to the beast, Arius engages it and manages to draw its attention with a series of massive blows from Smiggly’s Vengeance. Talbot tears into it with a hammer of righteousness while Faenor and Tiarmus successfully establish the flank and land telling blows of their own. Having met such feeble resistance in it’s first attempt, the Dunewinder goes for the grapple on Arius, attempting to lock down this source of brutal pain. Arius however, is a horse of a different color, ripping into the desert wurm with his halberd and smashing through the grapple attempt as though it were a kitten. Slain, the beast crashes to the ground, but just as our heroes believe the danger is over, it explodes and a massive flurry of guts and poisoned spines! Nearly everyone makes it through the explosion unscathed, except poor Pippy, who is nearly disintegrated by the blast and barely manages to hang on to life as Talbot rushes over to revive him. Shakily,the wizard gets to his feet, and attempting to muster his usual blaise attitude, saunters off down the road as though nothing had happened. Or, almost….the poor halfling wouldn’t stop shaking for some time.

Taking the remainder of the day to rest once a suitable campsite is located, our heroes heal their wounds and tuck in early, exhausted. The next day they continue, and around mid-afternoon the walls of Hlaungadath loom on the horizon. A couple of hours later they are at the ruined city gates, through, and making their way to the temple-heart of the city, where surely the sorceress makes her lair. Wary, Faenor quickly notices and points out to his brothers that they are being shadowed through the city. Indded, it is clear that several score lamia and many more of their Asabi slaves are following the heroes every step through the city, sheparding them on. Though none dare approach, our heroes can feel the press in behind them ever growing, and hurry on to the center of the city to confront the sorceress and be done with this unpleasant business. 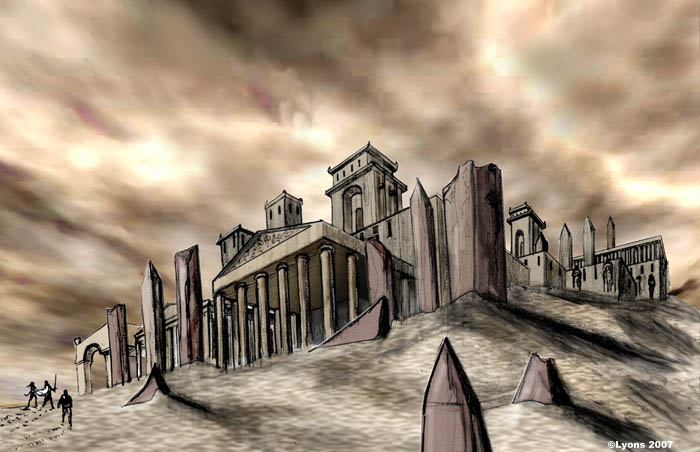 After what seems like hours the party finally approaches the temple at the center of the city. There is a barren field surrounding the structure, separating it from the rest of the ruined buildings. As the adventurers step off the streets into the field and leave the buildings behind, a glance back over their shoulders reveals a veritable hoard hanging back, seemingly unwilling to leave the shadowy safety of the buildings. It seems clear that into the temple is precisely where these creatures want our party to go. Unused to fear and seldom overcautious, the Brotherhood moves forward brazenly into the temple and immediately down. The upper stories are an open cathedral ceiling, though the main body of the temple appears to be subterranean. On the level below, our heroes enter a chamber with five suits of plate armor standing in a row in the middle with a passageway circumnavigating it, opening to the interior and lined with stone columns. Talbot, Faenor and Tiarmus begin walking this corridor, looking for any hidden doors or switches, while Arius and Pippy move toward the center to do the same. Arius steps on a tile in the floor which depresses, activating to the Helmed Horrors in the center of the chamber. The constructs mindlessly attack!

In stark contrast to the vicious if brief combat with the Dunewinder, these silent sentinels are no match for the combined might of the Shadowbane Brotherhood. Though each wields a magical greatsword of a different energy, and they seem impervious to certain of Pippy’s spells, they are nonetheless ill-equipped for the sheer combined damage potential and tactical prowess of Tiarmus and Arius. Faenor and Talbot close in from the far side of the room while Pippy completely melts one of the Horrors with a set of maximized scorching rays, and the fight is over practically before it began. Feeling as though this is the best this sorceress has to offer they will be, “home in time for dinner,” the Brotherhood brazenly presses on into the heart of the temple. Soon they find themselves in the lair of Koreeis herself. Seated on the dais at the far end of the chamber, her feline form in relaxed repose and human half appearing to lean back, the Lamia Noble looks up at our heroes as they enter with an almost bored expression.

“I know why you’re here, heroes,“ she purrs, chuckling to herself, “though I should tell you that you won’t be leaving with this.” She holds up the fragment our heroes have come for, and Arius gasps.

“How did you know we were coming for that,“ he asks, jaw agape, all five synapses firing at full steam.

“Idiot! Do you think you are the first to seek the power of this enchantment? I long ago learned of it’s power to lure adventurers, and I saw you lot coming miles off! You have walked right into my trap, Shadowbane Brotherhood,” she says with a cackle of glee, “and I assure you, you will not be walking out!”

With that, the sandy floor between the party and Koreeis erupts as nearly a hundred Asabi unbury themselves in a fury of poison tales and scimitars. The battle is on!

Before anything else can happen, Koreeis stands up from her throne and takes two steps forward. She stops, raises her hand, and looks directly at our adventurers; calmly, commandingly, she says, “You should not be here….go.” Though Talbot and Pippy are unaffected by the mass suggestion as she predicted they would be, the rest of the Brotherhood cannot fight her compulsion, and immediately turn to leave. In short order, Talbot and Pippy find themselves alone against the Lamia Sorceress and her hoard. Not to be so easily intimidated, they rip into action! Talbot fires a diamond spray into the massed Asabi and at Koreeis herself, destroying nearly half the lizard folk and dazing her in one shot. Though the Asabi have dogpiled onto them en masse, the feeble creatures are simply outclassed, unable to penetrate either Talbot’s armor, or Pippy’s devastating orange veil. Not to be outdone by a cleric, Pippy points imperiously at the sorceress and shouts, “Enough of this, idiot!” casting a feeblemind spell at the lamia. Rising up on her hind paws and smashing back down to the ground in defiant rage, Koreeis shakes off the effects of the spell and points back at Pippy, and in a righteous rage screams, "Turnabout is fair play, bitch!“ Before anyone else can bat an eye, Pippy’s eyes go wide, then utterly vacant, as his intelligence and personality are reduced to that of a turnip. Sensing that this is a battle to be continued another time, Talbot grabs Pippy and dashes for the exit, trailed by a seething mass of infuriated lizard folk and the taunting laughs of the Lamia Sorceress.

The shameful torment of her laughter echoes down the corridors behind our heroes as they flee the temple, and indeed the city of Hlaungadath altogether, as the potency of the sorceress’s suggestion spell would compel them for a full twenty-four hours. Needing magic beyond his own powers to aid Pippy, Talbot suggests backtracking to Sundabar to regroup. Having little choice, the Brotherhood agrees, and flees the city of Hlaungadath in shame, vowing a vengeful and righteous return.