The heroes leave the Yawning Portal, exhausted and ready to kick back with a drink and a wench at the Titty & Whistle. The sound of screams echo through the street as they walk, people running the opposite direction of the terrible noises. The sounds of battle can be heard as well, and smoke begins to fill the night sky as the heroes realize something is ablaze.

Turning the corner, the heroes find a gruesome scene. The Red Wizard Enclave is on fire, several of it’s members lying dead in the street. Along with their corpses are several of the City Watch, as well as a handful of innocents. Amongst the chaos stands a massive demon, its pincers rending an incapacitated soldier. It looks at the heroes and a calm voice reverberates in their minds. 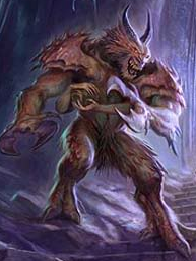 You are all that stands between me and my freedom? You will fair no better than the Red Wizards did.

Tiarmus rushes the glabrezu with a flying kick as Talbot casts a ward to protect his friends from its evil. The demon gestures, sending Arius and Faenor into a state of confusion. Despite his ailment Arius charges, slicing a mighty gash in the demon with Smiggly’s Vengeance. Pippy casts dismissal, but the outsider’s spell resistance would not be overcome.

After another flurry from Tiarmus and ward cast by Talbot, the demon uses power word stun on Talbot, preventing him from further helping his comrades. Again, despite the confusion, Arius cleaves into the demon with his holy weapon, gravely injuring the monster. Pippy’s maximized magic missiles finish the outsider off, dropping it into a smoking heap.

Larion shows up as the demon hits the ground, apologizing for his tardiness. With him a a gruff-looking man equipped with several magical trinkets. He introduces himself as Jardwim, leader of the Gray Hands. He thanks the heroes for their service to Waterdeep and tells them that they will inevitably meet again.

Returning the the Titty & Whistle the heroes find Fathead in an unusually good mood. Fathead explains that a very profitable deal may be in his future, but he does not want to speak of it before it bears fruit. They also notice that over the course of their patronage the customers have changed. What was once a oom filled iwth sailors and deadbeats is now filled with aspiring adventurers…

The party also decides on a title for themselves, a handle the group can carry. The Shadowbane Brotherhood is chosen in recognition of their mission against Shar and the forces of darkness that threaten Waterdeep and the Realms.

After a night of festivities Faenor is awoken by a strange noise. He notices the second story window to his room is open, and on the window sill lies a box. Upon opening it he finds a red sash, along with a note.

Only you are suited for this. Be wary of everyone and always look beyond the obvious. We will call upon you from time to time. Stay alive until then.
-TRS

The heroes awake in the morning to the sounds of conversation and pounding hammers. Coming downstairs they find dozens of men carrying planks, taking measurements and driving nails. They also find Fathead, and to their surprise, Mirt.

Mirt finishes his business quickly and wishes the heroes good day. Fathead tells them that Mirt and a “partner” of his have purchased the Titty, and that is it about to undergo serious renovations. Fathead is only staying on as proprietor, and this progression was made possible by the heroes growing reputation.

Around midday a pair of the City Watch arrive and tell the heroes that they have been summoned to Piergeiron’s Palace by the Open Lord, who is in the company of the High Priestess of Selune. Knowing the summons must be important they waste no time.

Waiting at Piergeiron’s Palace the heroes find Naneatha and Larion, as well as Lord Piergeiron himself. He welcomes them warmly and tells them he has several updates they will be interested in.

I am pleased to tell you that after more than a century of searching, a divination conducted by myself and Master Ilbrost Mythyl has revealed the location of the Dark Ranger. Sine before my time Vanrak Moonstar has been in hiding in a level of Undermountain known as Vanrakdoom. This level of the dungeon has no physical connection to the other levels, and teleportation an other methods of travel there were warded by Halaster the Mad when he constructed the dungeon.

The only means to access Vanrakdoom is through an incantation that has been torn into fragments and separated across Faerun. The first fragment is in possession of Lady Alustriel of Silverymoon, one of the Seven Sisters and a member of the Lords’ Alliance. She will be expecting you directly. Lady Alustriel will direct you to the second fragment and equip you with more information about the incantation.

Emphasizing the importance of their mission, Piergeiron and Naneatha advise the heores leave for Silverymoon immediately. 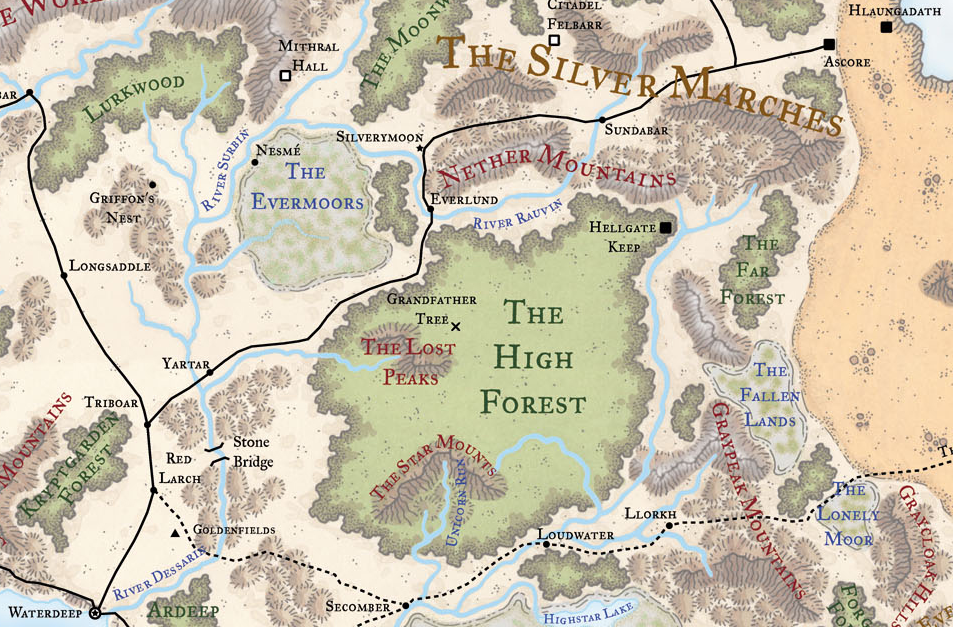 The horses given to them by Durnan serve the party well as they head North. After passing through Red Larch, Triabor and Yartar without incident, the heroes continue up the Evermoor Way toward Silverymoon. Night falls as they spot the High Forest in the distance to the right of the road and the Evermoors on their left. Not far off they hear the galloping of a massive beast, one that sets upon them quickly.

The charnel hound rushes into the heroes from the direction of Waterdeep, biting and clawing with it’s unholy, corpse-grafted bones. Though Arius injures the undead creature gravely, the monster injures him horribly. Pippy and Talbot send a volley of cure and scorching ray spells into it, turning it’s attention to the spellcasters. The beast injures each of them as well, but Pippy puts an end to the creature with a maximized lightning bolt. 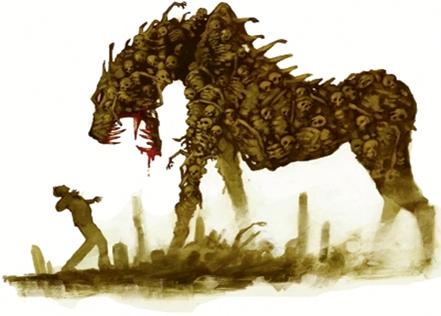 An odd place for a monster such as this…

Pressing on through Everlund, the heroes reach Silverymoon. It is little trouble finding Alustriel’s Court.

Inside the heroes are greeted by Lady Alustriel, the most beautiful and radiant woman they have ever seen. She first introduces them to her friend and bodyguard, Glatius Red Tiger, King of the Red Tiger Tribe and Swordmaster of Silverymoon. He does not speak.

Your quest is a noble one, she says, and I can aid you in finding two of the incantation fragments beyond the one I possess. The second is in the lair of Koreeis, a lamia sorcerer that has claimed the ruins of Hlaungadath in the great desert of Anauroch. He will not give up the fragment without a fight.

The third fragment is in Zhentil Keep, in the hands of the Archmage Manshoon. He will demand a heavy price for it not doubt, and I cannot imagine a way to infiltrate his tower. Perhaps the Blackstaff has something up his sleeve for a bargaining chip.

I know not where the fourth and final fragment is, but I am confident that you will find it once you have the other three. I wish you well on your mission. May Mystra’s blessings be with you.

Lady Alustriel gives the heroes her fragment and the heroes spend a lovely evening in Silverymoon, entertained and well fed. In the morning they take to the road heading west toward Sundabar and Anauroch beyond.