Pippy grew up in a good home in a nicer ward of Baldur’s Gate. His father, Fargo Potz, being a great adventurer and well know mage traveling with a group that called themself the Gem Cloaks. The Gem Cloaks did many good deeds along the Sword Coast including saving Pippy’s mother, and Fargo’s future wife. Shortly after Fargo retired and started a family with

Pippy came to the aid of the party after their botched attempt at gathering information on behalf of Xale of the Starry Glen. The halfling wizard now rounds out the party as their arcane spellcaster. 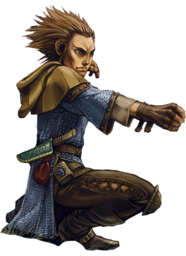