"Stay away from bad investors."

Mirt “the Moneylender” is a fat, wheezing old rogue, and retired adventurer. He made his fortune as an adventurer in Undermountain after a colorful career as a mercenary general. During this time Mirt, then known as Mirt the Merciless or the Old Wolf or Lord Walrus. he made many enemies all over the Sword Coast, but also a few friends, notably Durnan a fellow adventurer and Undermountain explorer.

Mirt has recently been revealed to be responsible for the party’s encounter with Hob through subterfuge. Despite his means, the end result has presented the party as heroes to the Lords of Waterdeep. Arius feels especially strongly that Mirt’s ends do not justify his means. 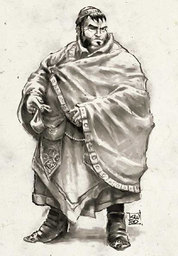