"We cannot rest while there is still corruption in this fair city."

Vest of Resistance: +1 to saves

Bracers of Armour: +1 to AC

Lens of Detection: +5 to search checks, +5 to survival checks when tracking

Combat Expertise
can trade attack bonus for AC (up to +5)

Sneak Attack: +4d6
Uncanny Dodge
Trap Sense +2
Trapfinding
Evasion
Darkvision: 60 ft
Stonecunning: +2 to search on stone
Stability: +4 bonus on checks against trips/bull rush
+2 on saves against poison
+2 on saves against spells and spell-like effects
+2 on appraise of stone or metal objects
+4 dodge against giants
+1 on attacks against orcs/goblinoids

Feanor is an academic and rogue staying at the House of Wonder, the Temple of Mystra in Waterdeep. He is very suspicious of anyone who he has not known long enough to trust, but fiercely loyal to anyone who has earned his trust. Being so distrustful, he is prone to staying in the background around new people, observing them and taking their measure, until he decides if he can trust them. He cares much for chivalry and honor, and has made it his personal goal to protect the weak and vulnerable and to root out and kill any evildoers he can get his hands on. He wastes few words. Likewise, he is a pragmatic dwarf, preferring simple, practical garb over unnecessary adornment.

Feanor grew up in the small town of Anfauglith. His father, Fior, was a renowned bow maker, and his mother, Lorn, was a beauty among dwarves, well known and loved in their small corner of the world. Even as a very young dwarf he was afflicted with wanderlust, and would often venture far enough from home to earn a tanned hide upon his eventual return. As he grew older his father, hoping to satiate his longings, began taking Feanor with him on business trips. This backfired, however, as it only gave fuel to his imagination. He would spend long hours in every town they visited sitting rapt as he listened to any old man with a tale to tell of far-away lands. At home and abroad he devoured histories and myths, sometimes camping out in libraries for days, traveling farther in his mind than he could with his feet. With his mind preoccupied as it was, he was unable to absorb much of the lessons that others would teach him. His elder brother, Finweg, took to the warhammer and urgrosh like a fish took to water, following in the footsteps of the long line of warriors their family could trace back to their most distant ancestors. Feanor meanwhile, came to rely more on the agility, quickness and stealth that came naturally to him, rather than take the time to hone fighting skills as his brother did. Feanor the Fleet was originally intended as an insulting epithet hurled at him by an uncle. Dispite the disapproval of some of his family, his immediate family, particularly Finweg and his father, grew to support his alternative interests.

When he became of age, he left home with a knapsack and a sword and began to travel far and wide, sometimes alone, sometimes with fellow travelers he met along the way. He sought adventure wherever he went, getting himself into trouble and mostly getting himself out of it, but returned home to Anfauglith every so often to visit his family and bring gifts to his little sister, Laurell. He felt at home on the road, but began to notice seeds of corruption and discord everywhere he went. The chivalry and honor he so loved in the stories he read he found to be lacking in the wider world away from his home. He found himself, more and more, staying for longer than he intended in a city or town to take up some noble cause or other. Through all this, he came to a greater appreciation of Anfauglith, for his hometown, quaint though it had seemed to him as a small lad, housed but little of the evil he found elsewhere.

Anfauglith was not to stay untouched for long, however. While staying for one of his few prolonged visits, three foreign dwarves came to call on the peaceful town. Being a fellow traveler himself, and still generally fairly trusting, Feanor got on famously with these strangers, whose names were Nod, Hob, and Dirg. The travelers spent a fortnight in Anfauglith, trading and buying supplies, and getting to know the townsfolk. Though they spent time bartering, they inquired about far more items than they bought, including a particularly powerful magical longbow that Feanor’s father had made. Fior would not part with the bow, named Rainmaker, which he considered his crowning achievement as a bowmaker. The three left shortly after amongst friendly farewells—- only to return four days later with a small army of goblins and duergars. It was all a ruse; they were merely scouts for this large raiding party. They overran the peaceful city and slew many, but were unprepared for the ferocious counterattack led by Forweg, who had returned to Angauglith from a hunt with a small group of the town’s toughest warriors the day after the three had left. Forweg rallied the townsfolk and expelled the attackers, but not before the bloodthirsty brigands had felled many good dwarves and filled their greedy hands with loot. The raiders retreated and Forweg gave chase, falling on Nod, Hob and Dirg just outside the city gates. Feanor, realizing that his brother was outnumbered but would not back down, jumped into the fray, but was quickly wounded and knocked aside as his brother fought valiantly on. When Forweg slew Nod with a crushing blow from his warhammer, Dirg turned to run. Now one on one, Hob was no match for Forweg, and was soon crippled by a blow to his left leg, but as Forweg stood over him with his hammer raised, Feanor’s brother was hit twice in the back by Dirg, who had turned back to loose arrows at him, arrows fired from none other bow than Fior’s Rainmaker. Dirg and Hob made off, along with the remaining deurgars and goblins, their pockets bulging, some of them dragging or carrying off the townspeoples’ wives and daughters.

Feanor was long in recovering from his wounds. It took all the longer for the loss of his brother and the news that was broken to him when he came to; his dear mother was one of the women carried off by the brigands. Fior, standing upon the gates and too wounded to give chase, let loose a final arrow after his beloved wife as he watched them carry her off. The arrow took her in the throat; he chose to kill her rather than leave her to the horrors that surly awaited those who were unlucky enough to be taken alive. Laurell nursed her brother and father back to health, but there are wounds that go deeper than flesh. “They’ve taken my heart,” Fior told them. Their father could not bring himself to take up his bow making, his tools falling into disuse. Laurell, ever cheerful, and Feanor, ever hopeful, could do nothing to bring their father back from the shadow that had fallen over him.

Finally, after almost a year of futility, Feanor admitted to himself that he could do nothing more in Anfauglith. He embraced his young sister, kissed his father, and left, vowing never to return until he had gotten justice for the slain innocent, and vengeance for the destruction of all that he held most dear. He promised Laurell that he would write her letters to keep her updated on his quest, gathered a few supplies, and left. He managed to track down and kill a pair of duergars, and a few goblins, and lost several new friends in the process. He sent the head of every one he killed back to his father and sister. However, the trail had gone cold on the two he most longed to clash steel with; Hob and Dirg.

In his search for them, Feanor chanced to meet others who had had injustices done to them. He found that, though he had personal reasons for wanting to find Hob and Dirg, he could not leave another family grieving, or another city or town overrun with evil and decay, if he could be an instrument of justice for them. So it happened that when he followed the cold trail of a duergar named Nargond, who was now going by the name of Darinion, into Waterdeep, he could not help but feel for the people of the city when he learned of the evil bubbling underneath the placid surface. His reputation as an uncompromising bringer of justice must have preceded him, as he was quickly asked to help root out the corruption in the Watch. With no leads on Dirg, or the crippled Hob, he decided to throw himself headlong into liberating the populace of Waterdeep. 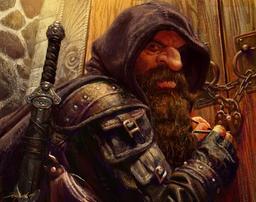