A sight for sore eyes, the heroes return to Waterdeep after a pair of hard fought battles with the lamia sorceress in the ruins of Hlaungadath. Wasting no time, the battered party makes its way to Piergeiron’s Palace to report victory to their Lord.

The heroes are welcomed by the guards, who have grown to admire the adventurers for their contributions to the city. They find Lord Piergeiron in the garden, along with a warm and welcoming Naneatha. Both congratulate the heroes and tell them that Xale is off researching the location of the fourth and final fragment that will allow them access into Vanrakdoom. Naneatha expects a report from Xale soon.

Speaking grimly and with conviction, Lord Piergeiron tells the heroes that the third fragment is in possession of Manshoon, Archmage of the Zhentarim. He tells the party that retrieving the third fragment will more likely be successful if it is being conducted by someone learned in the arcane. As Piergeiron has little understanding of wizardry, he is turning the operation over to Khelben “Blackstaff” Arunsun for the time being. Piergeiron warns the heroes that Khelben is a good man, but he is one that feels the ends often justify the means. Khelben is wise and experienced, but does not have the moral compass that Piergeiron and Naneatha draw from their respective faiths. With that Piergeiron allows the heroes to rest. They have a date at Blackstaff Tower in the morning. 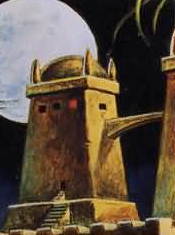 After a much needed night’s rest, the heroes make their way to Blackstaff Tower. They enter without event, observing the many apprentices at work as they ascend the staircase towards Khelben’s office. Atop the tower they find the archmage, wearing his usual dark clothing and carrying his trademark black staff. Next to him is a silver-haired woman with smooth skin and breathtaking features. Pippy recognizes her as Laeral Arunsun, Khelben’s wife and one of the fabled Seven Sisters.

Never one to postpone urgent matters, Khelben begins, “The fragment we seek is in Manshoon’s Tower, far to the east in the Citadel of the Raven. Manshoon is a very powerful and resourceful man. He makes use of a spell called stasis clone, which keeps many ready clones at hand if he is killed. He is the Archmage of the Zhentarim and an ally of many powerful beholders. He will be no victim of a smash and grab crime. I have much that he desires he may take in trade for the fragment, but I will not turn such things over to a man like Manshoon. Let me ask you, did Piergeiron warn you of my methods?”

The heroes retort, noting that Piergeiron noted that Khelben’s methods would differ greatly from his own.

Noting that the tension in the air is thick, Laeral intervenes and tells the heroes that she has heard of their deeds in Skullport, a town in which she is heavily involved. She also pays them the compliment that her sister, Lady Alustriel, has spoken highly of them. Khelben allows the small talk to continue for only a moment.

Nearly jumping out of their boots, the party is startled to see a man appear beside them from seemingly nowhere. He is tall and dark, with sharp features and an array of magical jewelry.

Pippy recognizes the name immediately. He tells his friends that Sememmon is the former apprentice of Manshoon and former lord of the Darkhold, a Zhent stronghold to the east.
Khelben continues, “Sememmon’s interests are our own in this endeavor. He is the only man alive that stands a chance of penetrating Manshoon’s Tower to retrieve the fragment. You will accompany him.”

The heroes begin to protest, but the Blackstaff cuts off any retort with a cold gaze and dismissal from Blackstaff Tower.

That evening the heroes return to the Titty & Whistle, where renovations are almost complete. Sememmon casts disguise self before entering, not wanting to draw any unwanted attention. The party is served a fine meal complete with drinks and wenches. They note that a intricate craving is being hoisted above the taproom. It is of them, the Shadowbane Brotherhood.

Sememmon remains polite and answers the heroes’ questions, telling them that he is indebted to Arunsun for helping him escape Fzoul’s clutches. When asked about a plan, Sememmon tells them that he has prepared two customized teleportation spells, one for entry into Manshoon’s Tower and one to exit.

That evening’s rest is plagued with doubt and anxiety for the heroes, untrusting of their new companion and unprepared for the seemingly impossible mission before them…

After breakfast and with no further reason to delay, a disguised Sememmon approaches the party. With a simple nod he casts a spell. A moment later the heroes find themselves in a massive alchemy lab, with a hungry beholder floating before them!

Closing its central eye to employ the rest of its deadly rays, the beholder unleashes a volley of beams at the heroes. Though injured, they bring the monster low quickly, eager to press on toward the third fragment.

Opening a pair of engraved double doors, Sememmon allows the party to enter the tower’s apex. Inside are countless tomes lining the walls and glyphs adorning the floor. Massive window allow the heroes to look into the sky above the Citadel of the Raven. Violent storms rage above, with the boom of thunder and flashes of lightning illuminating the otherwise dark room. All a sudden Tiarmus’s ion stones drop from above his head, Smiggly’s Vengeance loses its holy glow, and all the mystical shimmer that surrounds the heroes’ fabulous adventuring gear dies down. Then a booming voice echoes through the room, as though the thunder clouds above were crying out.

“You were a fool to come here, Sememmon.”

Lightning flashes again and the room becomes illuminated, revealing a small army of armored trolls, giants, beholders and apprentice spellcasters surrounding the heroes. All bear a blood-thirsty look, ready to rip the intruders to shreds. Lightning flashes once again, this time revealing the legendary Manshoon, Archmage of the Zhentarim. His charismatic voice echoes through his gorget. 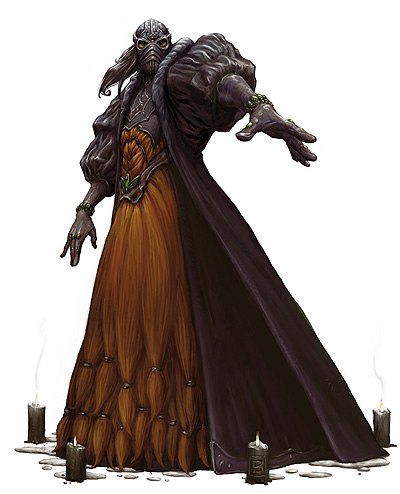 “And what do you come here looking for, my old friend? A text? An artifact? My head? What bootlicking does the Blackstaff you up to now? And what is with you, Sememmon? They have the look of heroes.”

Though reserved, the heroes introduce themselves. Talbot is especially disgusted with the circumstances. Manshoon eludes that the heroes have no idea with whom they work. Not one to mince words, the conversation quickly turns to the fragment, and what Manshoon will take in exchange for it.

“You know what you must do, Sememmon. What you were going to do before you fled. It must happen. They are there. Now. Waiting for him.”

Confused and nervous, the heroes notice that their magical items reenergize. Sememmon’s fingers once again crackle with magical energy. He wastes no time.

The party clutches at Sememmon, who teleports them away in a flash. A moment later they are standing atop a mighty table, staring down at a very startled group. The seven men at the table wear varying adventuring gear, all of which is dark and bearing the insignia of the Zhentarim. They move to draw their weapons on the intruders standing atop their meeting table.

“All of them,” Sememmon says, motioning with his hands. The lone wizard at the table falls into a state of catatonia, his eyes rolling into the back of his head.

The ensuing battle is anything but. Without much choice, the Shadowbane Brotherhood slaughters the assemblage of Zhentarim agents. Arius shows little remorse as he cuts through them from atop the table. A moment later the blood-soaked party steps down from the table, unsure exactly of what just transpired. Talbot stops Sememmon before he can speak.

“What was that,” Talbot says, “we were to murder Manshoon’s enemies? And how are we supposed to get the fragment now?”

Sememmon pulls the third fragment from his cloak and hands it to Mystra servant.
“We must make our way to the Red Wizard enclave here in Zhentil Keep Semmemon says, “I had only two teleportation spells memorized and have used them both. We must obtain a scroll from the Red Wizard Enclave and get back to Waterdeep before we attract the attention of Fzoul or the rest of the Black Network.”

Throwing his hood over his sharp features, Sememmon leads the heroes out onto the streets of Zhentil Keep.