After a night of fine food, wine and impressions, our heroes depart Mirt‘s house withe the rest of the Moneylender’s guests. Upon exiting Lord Piergeiron stops Aruis, whose face is still swollen and damp from the tears he shed on Smiggly‘s behalf. Naneatha joins the conversation as well, and the telling body language between them indicates they have come to some agreement. Naneatha and Piergeiron begin to lead Arius to the rear of Mirt’s home, into a vast and beautiful garden. She indicates that the rest follow.

Xale urges the rest of the heroes forward into the garden.

In the garden an ivory pedestal sets firmly in the stone walkway near a small brook running through the yard. Piergeiron pulls the white cape he had been wearing from his armor and throws it over the pedestal, the cape coming to a gentle rest atop it.

“Set your halberd on the altar, Arius,” Piergerion tells him, “so that it may be judged by the gods.”

Nervous, Arius does as he is told by Waterdeep’s open lord. Piergeiron the Paladinson draws his shimmering Holy Avenger and holds it skyward.

Tyr, God of Justice, hear me now. Before you lies a weapon of righteousness to defend the weak and strike down those that would do evil. Grant this tool the power to smite the wicked and grant this boy the wisdom to wield it well!

The stars lining the sky begin to shimmer. Naneatha steps forward to the altar and throws a bit of dust it the air above the weapon.

Moonmaiden, hear the pleas of your servant. Under your wondrous light lies a weapon to avenge our loved ones and stay the malevolent hands of our enemies. Our cause is that of all good faiths, that we may show the forces of darkness with whom they deal!

The moon’s light grows suddenly, it’s illumination filling the night sky as though it were the sun. Out of the clear sky a lone bolt of lightning strikes down, engulfing the altar and halberd in a great flash that nearly blinds the onlookers. A thick smoke covers the area, but dissipates as a gentle breeze blows through the garden. Piergeiron lifts the halberd from the altar. The adamantine weapon now glows with a holy light much like the sword the paladin had drawn.

“Arius Arinion, defender of Waterdeep, I present to you now…”

The following morning at the Titty & Whistle Arius is all smiles, like all the guilt and grief of Smiggly’s death had waned enough that Arius’ boyish charm of old had returned. The topic of conversation over breakfast is the need for a headquarters, as the varied housing the heroes use has quickly become unsatisfactory. Before any decisions are made a familiar face walks through the door.

“Good morning, my lords. Lady Naneatha requests your audience at the temple this morning if you please.”

Wasting little time, the heroes finish their breakfasts and make their way toward the Temple of Selune. Inside they find Naneatha speaking to an older, well-groomed cleric of Mystra. Both Pippy and Talbot have seen him around, before the fire destroyed much of the House of Wonder. The man smiles and approaches them casually.

Ilbrost goes on to tell the heroes that Naneatha made him aware of the exchange they had last night with Meleghost at Mirt’s home…and he is most pleased. There are many in the Church of Mystra that have no taste for Meleghost’s leadership and would like to see a new magister take the church in a fresh direction, especially since much of it is being rebuilt. Ilbrost claims he is too old and not a skilled enough diplomat to cross swords with Meleghost, and many are too afraid to speak against him. Talbot seems to be the exception to that.

Ilbrost takes his leave politely, telling Talbot to think about a leadership position in the House of Wonder. Not for Talbot of course, but to get the organization back on a more noble course.

The day is uneventful. The heroes take care of simple day to day matters and waste time with debauchery and banter. That evening they stand on the deck of the Titty & Whistle enjoying their drink when a familiar figure steps from the the shadows of the alley across the street. It is the woman that had given them a lead to the Xanathar Guild, wearing the unmistakable red sash. She beckons them toward the shadows of the alley. They heroes comply.

“You have been busy, friends, so I forgive you for ignoring our letter. Nonetheless there are goings about this evening not even Lord Piegeiron knows of. The Xanathar move still as they make bigger plans. Are you still small enough to help the commoner?”

She hands Faenor a letter stained in blood. It reads:

We bear information that is imperative for all who are loyal. Our time is coming. The might of our allies grow, and ours in turn. I will bring a fine gift to give to their champion, the one they say will slay the interlopers. It is the monk weapon that matches the monastic array worn by the monk interloper, Tiarmus. Their champion will no doubt take the items from his corpse to sweeten the deal. He is welcome to them.

Be at the cesspool in Dock Ward at midnight. Hear the rest.

When they look up from reading the note the woman is gone.

Approaching the dump near the harbor in Dock Ward, Tiarmus is the only one that spots a floating mass hiding behind a stack of garbage. The drinks a potion of haste and moves quickly around it. As he does, a beholder makes itself known, unleashing a volley of rays from its eyes tentacles at Arius, Talbot and Faenor.

Though the heroes are able to shake off the worst of the rays effects, the beholder floats higher and out of the range of their melee weapons. Arrows and sling bullets fly skyward at the aberration, wounding it. Before it can consider escape Pippy channels a lightning bolt through his metamagic rod, turning the monster into a sizzling corpse. Hidden near the creature they find a gift box containing the Scorpion Kama.

Questioning the nature of this ‘champion’ that has been charged with their deaths, the heroes begin to speculate who it could be. Talbot suggests that perhaps it is the Dark Ranger, whose way they are no doubt in. Faenor suggests that perhaps Lady Alathene Moonstar knows something of it, and so they make their way to the Blushing Mermaid.

Uneasy with revisiting the site of Smiggly’s death, the party nonetheless enter and gain audience with the Lady. She is pleased to see them and offers the tavern’s hospitality. Upon hearing of Shar champion, she suggests that the assassin is a member of the Order of the Dark Moon, a sect of monks in the service of the Lady of Loss. It would only make sense if the assassin is being provided a gift like the Scorpion Kama.

She assures the heroes that if Vanrak came out of hiding after all these years to kill someone in Waterdeep, it would not be them.

After a good night’s rest the heroes again meet in the common room of the Titty & Whistle. A messenger from the Courier’s Guild walks in and tells them that Durnan, owner of the Yawning Portal, has requested their presence with great urgency. He says it is a matter of life and death. As they depart in haste, the courier requests that the group come up with a name for itself, as many parties in Waterdeep are now contacting them regularly.

The heroes make their way to the Yawning Portal quickly. They note that there are five horses in full tack and saddle tethered to the post outside. Upon entering an attendant immediately approaches them. 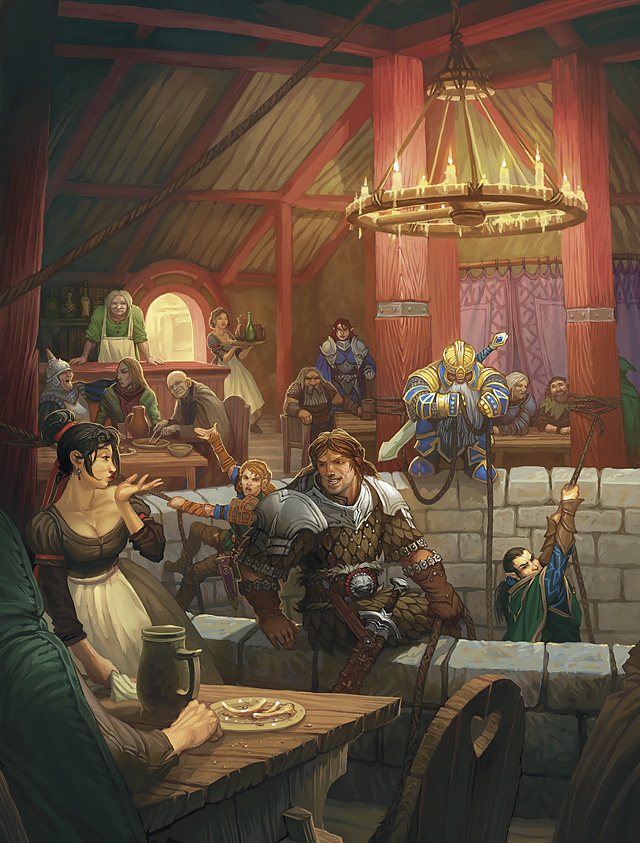 Talbot tries to stop the attendant, but the man suggests he knows why they are here and quickly leads them to a private room. Inside a man with gray streaks through his dark hair and a scar across his nose.

“I am Durnan,” he begins, "Keeper of the gate to Undermountain. Twice you have barged into my establishment and forced your way under the mountain. And your dark friend hospitalized a dozen fine guards of mine…but this is for another time.

“…a very influential member of the Xanathar Guild named Ahmaergo has been captured by two troll mercenaries employed by the Plague Rats. They are taking him to the Rat Hills, where they will turn him infect him with their sickening lycanthropy and release him as an agent back to the Xanathar. They are less than 5 miles form Waterdeep. There are five horses waiting outside.”

Talbot begins to speak but is cut of quickly by Durnan.

“They are moving now. Time if of the essence. Go.”

Making time across the countryside south of Waterdeep, the heroes begin to soak in the foul smell of the festering garbage that makes up the Rat Hills just a few miles south. It is not long before they see three forms in the distance…

The heroes dismount and engage the trolls, who are dragging a wicked-looking dwarf in platemail across the plain. The fight is short, with a flame strike courtesy of Talbot and a pair of scorching rays from Pippy badly injuring both monsters. Arius removes most of one’s torso with his halberd, Faenor closing in with his flaming sword to finish the job. 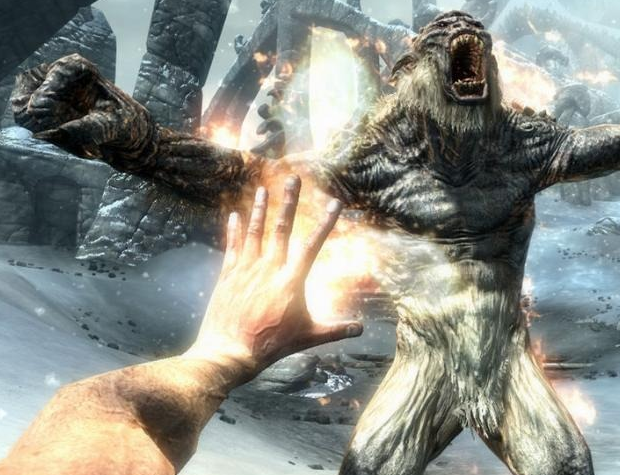 Ahmaergo immediately tries to bribe the heroes, promising gold, gems, magic and the rest if they could see fit to release him back to Skullport. His pleas fall on deaf ears, Faenor telling Ahmaergo he is going to be gagged if he keeps talking.

Unsure if they can trust Durnan, the party releases their silver raven to find Larian Shadowfriend, whom they feel should be conducting an interrogation concerning the Xanathar. Much to their surprise, the raven makes its way to the Yawning Portal.

Walking in the heroes find the patrons a bit different, all of which seem to be getting a good look at Ahmaergo. The attendant leads the heroes with to Durnan, who surprisingly stands beside Larian. Larian pulls a series of metal bars from his pouch that break down into a chair of some kind. Forcing Ahmaergo to sit, Larian locks Ahmaergo’s chains onto the chair, which begin to glow.

It becomes obvious that the chair is forcing the truth from the dwarf as Larian begins to question him. The Xanathar hand tells Larian, Duranan and the party that the guild’s involvement with the Church of Shar is for mutual gain. They will eliminate the Plague Rats, Shadow Thieves, and all other opposition within the city. Shar’s Dark Moon monks have provided an assassin to take care of the heroes, who is in Waterdeep making preparations now. Ahmaergo is no doubt himself on the hit list now that he has disclosed the guild’s secrets…

Satisfied, Larian tells everyone the prisoner is going directly to Lord Piergeiron. He nods at the party and gives an annoyed look to Durnan.

“I don’t know how you knew about this Xanathar/Plague Rats matter without my knowing, but I aim to find out. I’ve got my eyes on you, Durnan.” Larian takes his leave.