Upon being instructed by Anise Fuxby that, “the Boss,” is likely questioning Mirt personally in Skullport, the party heads off further into Undermoutain. Fuxby tells them there is a collapsed wall on the first level of the dungeon leading into the Underdark, and that they can make their way to Skullport from there.

Moving quickly through the massive dungeon, the party hears the sound of gold coins being counted. Pippy taps Faenor and Tiarmus with his wand of invisibility, allowing the pair to scout ahead. They find a fomorian giant in the junction room, along with the collapsed wall and entrance to the Underdark they have been seeking. In the room is a pile of gold and items. The giant has obviously been using the entry as a choke point for creatures coming from the Underdark, taking their riches after crushing them to paste with his spiked club.

Arius charges into the room, taking a nasty blow from the ugly giant. At that point his comrades become visible, unleashing a volley of attacks at the unsuspecting monster. The battle is brutal but short, leaving the giant dead and his treasures ripe for the picking.

Moving from the dungeon down into the Underdark, the party realizes that they have never explored this infamous part of Faerun geography. The underground lakes, slippery and narrow bridges, and dark foreboding landscape make the entirety of the endless caves look the same. After slaughtering a gang of kobolds, the party accepts the fact that they are hopelessly lost. Only by chance do they stumble across a metal door built into the stone. It is the first piece of construction they have seen since entering the blackness.

Faenor instantly notes that the door is armed with a fireball spell triggered when it is opened. He botches an attempt to disable it, causing a fiery explosion. Luckily for the nimble rogue he leaps from the burst undamaged. Picking the door’s lock, the party enters the room beyond it.

There the party is greeted with a scowl and a threat from a dark elf priestess bearing the symbol of Lolth. Acting quickly, Pippy conjures a wall of fire near the alter, sealing the priestess off from the party. Arius rushes her, leaping through the flames to the dark elf’s side. Tiarmus does the same, his quickness allowing him to land a crushing spinning kick to her head before she can react. 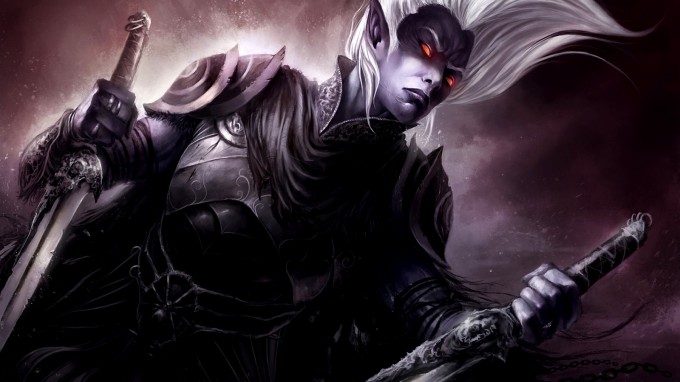 At this point her minions leap from their hiding places, some on screaming and on fire from Pippy’s wall. Several drow close on Talbot and Faenor, stabbing and slashing is desperation with their rapiers. The room’s heat becomes too much, causing some of them to collapse. The drow’s wizard finally makes himself visible, cutting loose with burning hands on Talbot and Pippy at the room’s entrance. Faenor and lays several more of the drow soldiers low. The few remaining lose morale an instant later when Arius removes the priestess’s head from her shoulders with his halberd.

Dispelling his wall of fire, Pippy and the party finish off the lone wizard. The dark elves are covered in valuable magical items, many of which are fine weapons and armor. Most valuable, the party finds a magical map of the Underdark under Sword Coast North, including the route to Skullport and several key locations throughout the caverns and Undermountain. Noting that they are not actually very far from Pokey Bitz, the party journeys there to sell off the drows’ equipment. They had been lost indeed.

Happy to see them and pleased with their goods, Pokey shows the party his new collection of augment crystals. He tells them that he bought the crystals from several drow wearing equipment a lot like what the party was selling… Oh well. After a few purchases they thank Pokey and head back toward Skullport and Mirt, their new map leaving no doubt which direction they should be going in. Pokey points out a large chamber on the map that he notes is a massive cavern, usually housing a monster with some authority over the near Underdark. The party will have to pass right through it to reach Skullport.

Newly equipped and determined to find Mirt, the party makes good time through the dark tunnels. As expected, the path opens up into a towering room containing standing water and dreary-looking plant life. Thinking they hear dialogue, the party takes a few steps into the underground swamp. The dialogue suddenly stops as the talkers make themselves visible.

The first is a yuan-ti cult leader, it’s serpentine tail swimming behind it as it pulls a flaming falchion from its belt. 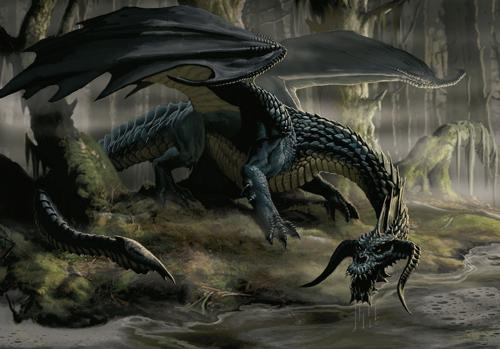 The second is a large black dragon, acid dripping from its maw as it stares at our heroes intently.