As the party enjoys their breakfast at the Titty & Whistle, a dirty street-urchin child approaches their table. He tells the party that Mirt wants to see them, that he has something for them. Without much of an invite, the smelly child finishes the breakfasts of the party.

Making their way across Waterdeep to Mirt’s Mansion, the party finds the courtyard surrounding the residence full with street urchins. Mirt wades through them on his way toward the party, his girth knocking the skinny children out of the way with ease. 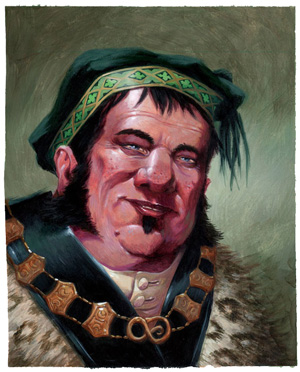 “Well met,” he begins, “I have heard of your exploits and asked that you return when you had gained experience. Now that you are a bit more accomplished, I have a mission taht must remain discreet.”

Mirt leads them away from the ears of the children.

“There has been a paladin of Helm that has offered to take on some of these children. She was extremely convincing that she could offer them a better life, and that she only needed my help in gathering them. After taking several dozen children, I heard of no program that was being run to help them. They were simply gone.”

“I became suspicious, and had the paladin followed. She led one of my agents to an unmarked warehouse in Trades Ward. The warehouse is sealed. I need someone to get inside and find out what has happened to these children. I fear the worst.”

The party accepts Mirt’s mission, adding that he owes them much for taking care of his dirty laundry. Sickened that he may be responsible for dark dealing, Mirt sends the party on their way.

The warehouse itself is nothing special. The windows have been boarded up to prevent prying eyes, and the front door is well-made with an eye slit. Upon knocking, the party is greeted by a pair of beady eyes behind the slit. Tiarmus mutters a nonsensical reason for being there. The slit shuts and latches.

The party finds a small rear entrance to the building. Faenor is able to disarm the spring-loaded poison trap and open the lock without drawing attention from passers by. The party enters the warehouse as quietly as they are capable of.

They are immediately set upon by the fiendish occupants of the building. The first Talbot identifies as a Hellcat, a demon of Baator. Arius is attacked by an enlarged duergar wielding an two-handed axe as a fey’ri encompasses itself in a globe of darkness.

Despite the globe, the fey’ri suffers a mortal wound early in the battle, laying him low to bleed out. Arius sunders the duergar’s axe, leaving the dark dwarf defenseless against his whirling halberd. The Hellcat injures several party members badly, but their combined might kills the creature in spite of its invisibility. The party notes the bloody chains hanging from the ceiling afterward, but no bodies…

Healing the fey’ri enough to prevent its death, Talbot has Faenor bind it with the stone rope, making escape impossible. After a brutal interrogation the fey’ri tells the party that the “paladin” has been taking the children north of Waterdeep, to the edge of Kryptgarden Forest.

Wasting no time, the party throws the bound prisoner in a cart and takes him out the North Gate and down the Long Road toward Kryptgarden Forest. Upon reaching the edge of the forest, Talbot casts a spell on Arius that makes the fighter shed light as the daylight spell. Not caring for their approach, Tiarmus moves outside of the light’s radius and around the hill they are approaching to flank their target. 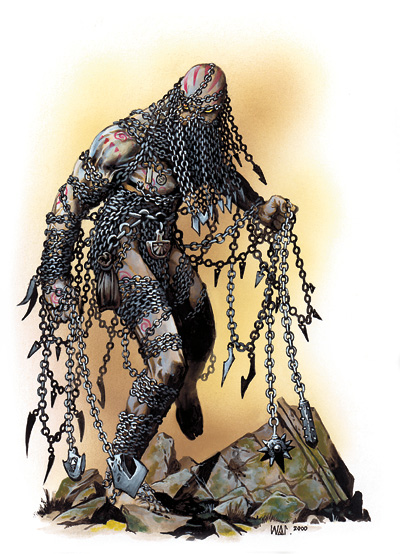 Atop the hill is a nightmarish scene of gore and evil. The scattered remains of dozens of children litter the landscape. Two chain devils are there to greet the party, with their leader, an erinye, taking to the air with a bloodthirsty look in her eyes. The devils appear to be sacrificing the children in an attempt to gate in greater devils.

Enraged at the sickening scene, the party rushes in to meet the devils head on. Tiarmus flanks the devils as Faenor and Arius move to meet them in melee. Pippy begins hurling evocation at the airborne erinye, noting its resistance to his spells.

Though bloody, the chain devils fall before the party’s onslaught. Desperate, the erinyes dives downward with her longsword to meet them in melee. She notes her mistake as the party’s blades tear her apart.

Disgusted but victorious, the party finds no survivors. Saddened and frustrated, they move back to the cart with the fey’ri inside, telling him that he is the only creature left to be held accountable for this act of evil. The rest are dead.

The party takes the Long Road south toward Waterdeep, anxious to speak with Mirt.

You left out where Mirt’s daughter was taken.